The conference will be held on the campus of Ecole Polytechnique in Palaiseau, located in the south‐west of Paris. 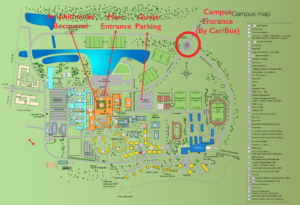 Should you wish to reach Ecole Polytechnique on your own by using public transport, you can take the “regional subway” train RER B to either Lozere or to Massy-Palaiseau station, as described here.

Should you wish to come by private car, you can point your GPS to these coordinates to “Parking des visiteurs” (guest parking), which is indicated on the map above:

A daily shuttle is provided between Musée d’Orsay (Quai Anatole France, 75007 Paris, in front of the Musée d’Orsay) in Paris, and the workshop venue.

The pickup venue is located on metro line 12 (green line) at the “Solferino” station, or by RER-C. Consequently, any hotel near a station on that line will be easy to access. The following hotels are within easy reach from the shuttle pick-up point in Paris (either walking distance, or directly by metro line 12):

Should you wish to stay closer to campus, the following hotels are near (a couple of minutes by foot) the Massy-Palaiseau train-station, from which a public bus line goes directly to campus, and from where a suburban subway train (RER-B – Blue RER) can whisk you to downtown Paris in 15 min:

This hotel is within walking-distance from campus (800m or so):

Should you wish to stay on campus, a number of on‐site rooms, at affordable rates,  are available in the on-campus hotel at Ecole Polytechnique. All rooms come with en-suite wc and either of bathtub or shower cabin. Wifi access (free), toiletries, a work desk, and a TV. Breakfast is not included with the room, but is provided to registered participants as part of the work shop catering:

These rooms may be going fast, thus, to reserve send an email to thomas.clausen@polytechnique.edu.

Getting To/From the Airports

Traffic around any major city can be unpredictable, and can render taking a taxi complicated and/or expensive. Paris is no exception.

If you want to take a taxi, make sure to go to the official taxi stand at the airport. It will be clearly indicated where that is. Most taxi’s in France will accept only cash. If you want to pay by credit/debit card, you can ask the dispatcher for a taxi that takes cards. Two fairly large taxi companies in Paris, where all the drivers take credit/debit cards, and are TaxiG7 and Taxis Bleus.

But, if you arrive to either of the Paris airports during “daytime” (= rush hour),  your best bet is to take the RER-B (suburban subway train).

For either of Orly or Charles de Gaulle Airports, you will first take a small airport transit train (which runs every couple of minutes):

From there, you will take the RER-B. Tickets are available in (english-language) vending machines, which take credit cards & Euro’s.

Note, not all RER-B will serve all destinations: the line is bifurcating, and furthermore may skip stops. You will first want to identify the right platform (going north or going south), and then look at the panel above the tracks to see which stations that a given train serves:

All meals and coffee breaks during the conference are included with your registration fee.

The gala dinner will take place in downtown Paris, at  Maison des Polytechniciens” (12 rue de Poitiers – 75007 Paris – just next door to the Muse d’Orsay). Transportation from the workshop venue and to this location is provided. Registration includes one Gala Dinner ticket – one additional ticket per workshop participant can be purchased (see registration).

Please note that there is a strict non‐smoking policy in all public sites in France. Hence smoking is not allowed anywhere inside the buildings of Ecole Polytechnique. Dedicated, outside, smoking areas are available.

About the Venue – Ecole Polytechnique

Ecole Polytechnique (often nicknamed X, both recognizing the letter formed by the crossed canon barrels from its original logo, and as a wink to the universality of its graduates – the mathematical X which in an equation can assume any value) is the foremost French engineering school. Known for its extremely competitive entrance exam, it produces graduates that occupy outstanding positions in industry and research. Among its alumni are several Nobel prizes winners and many CEOs of French and international companies.

Founded in 1794 and initially located in the Latin Quarter in central Paris, it was moved to Palaiseau in 1976. Traditionally, a favoured goal of the polytechniciens has been to join the elite government bodies known as the grands corps techniques de l’État (X-Mines, X-Ponts, X- INSEE,…) ; nowadays the majority of the 500 students who graduate each year join the civil society, from start-ups to Fortune-500 companies. About 30% of the graduates of Ecole Polytechnique pursue a doctoral degree.

The research center of Ecole Polytechnique span, in its 22 research laboratories, all major scientific fields, combines the most fundamental aspects of research with the pursuit of progress in the most applied main fields in order to meet future scientific, technological and societal challenges. These 22 laboratories are organized around eight Major Fields of Research: